It’s funny to use the words fast and slow to describe one thing. But, in this case it’s rings true!  This Cinnamon Swirl Pancake Bake can be made in about an hour in your slow cooker.  It’s basically pancake mixed baked up into a thin bread form. In my opinion, it sure beats sitting over the frying pan and forming pancakes all morning for breakfast. I’d much rather set and forget for a bit. While I am doing all of my other morning rituals, breakfast is cooking all the while. Sweet deal and makes the house smell fabulous too. 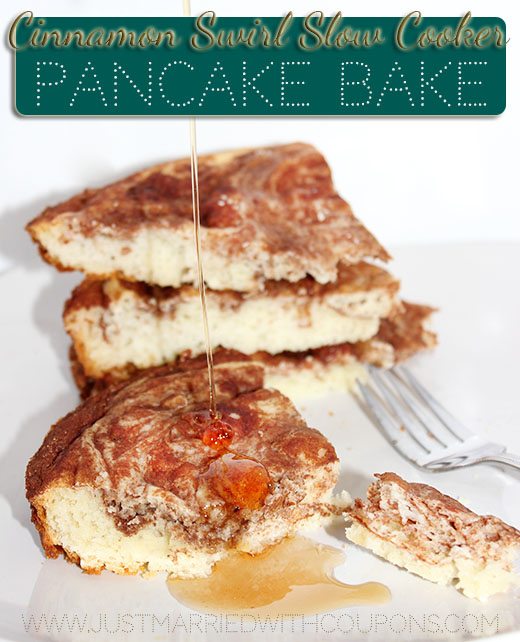 Last week I shared a 1 hour slow cooker bread recipe and decided to try something sweet, well, that’s how I ended up giving this pancake bake a try instead. So, I’ll still be playing around and giving some different ideas a try. You know I’ll share. I picked up this amazing apple bread from the grocery store last week, it was total heaven. If I can re-create something like that in the slow cooker, I will be ecstatic! So look out for my little slow cooker experiments 😉 My goal here? Shortcuts. Saving on time and save on money! Keep my family happy! Will keep you posted if it’s any good, that is!

Save Recipe
Print Recipe
My Recipes My Lists My Calendar

Do you have a special home cooked shortcut for breakfast? Share your tips!