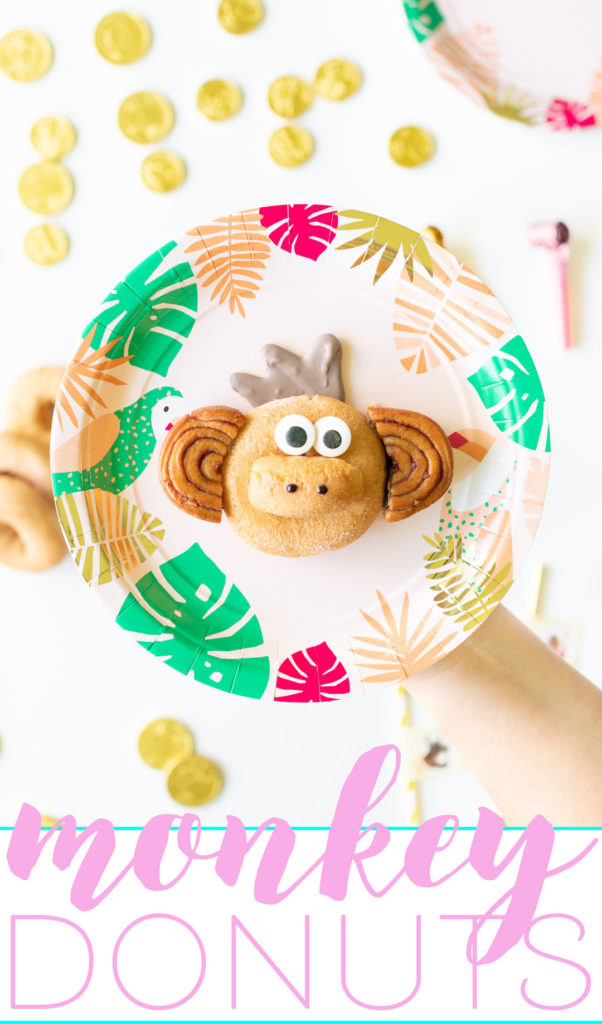 Thanks to Paramount Pictures for sponsoring this post, all opinions are my own.

Are you up for an adventurous flick this summer? You’ve totally hit the jackpot! Tap into your wild side when Dora And The Lost City of Gold opens in theaters on August 9th. In anticipation of the movie, I’m sharing adorable monkey donuts inspired by Boots and cute printable Dora and Boots straw flags to get the party started! 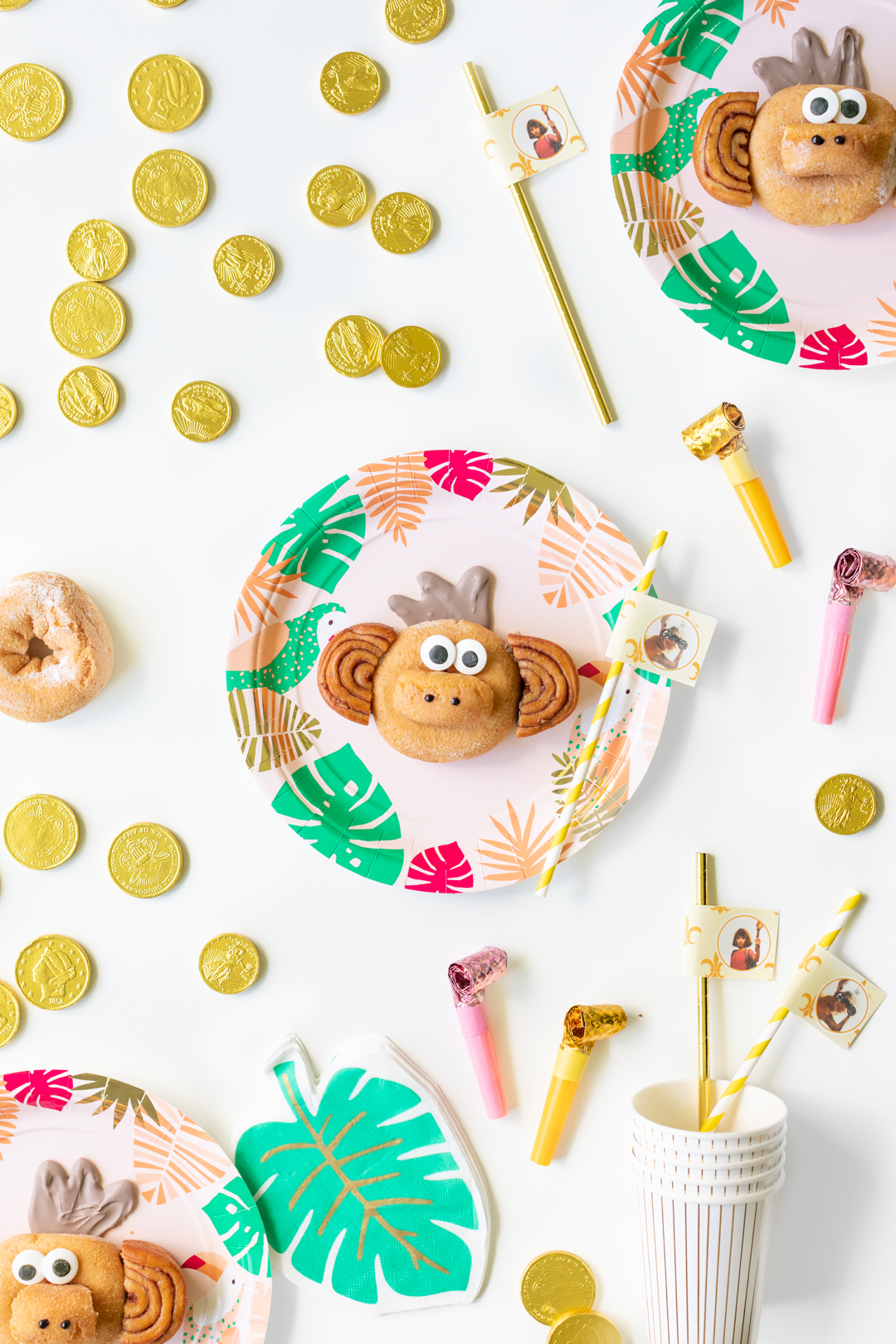 Dora And The Lost City of Gold starts with one of the most unexpected journeys to date… Dora is going to high school! What was supposed to be a low key school year with Diego (Jeffrey Wahlberg) and a break from jungle life instantly turns into one of Dora’s (Isabela Moner) most dangerous adventures ever. Filled with wild adventure and a few gut busting giggles surrounding quicksand, we get to see the classic characters we’ve loved in this all new live-action movie. I’m excited to see how an ordinary day at school turns into a mission to save her parents (Eva Longoria and Michael Peña) and to solve the impossible mystery behind a lost city of gold.

See Dora and her BFF Boots in the clip below and then find out how to make monkey donuts and printable character straw flags inspired by them:

See Dora and her BFF Boots in the clip below and then find out how to make Boots inspired monkey donuts and printable character straw flags inspired by them: 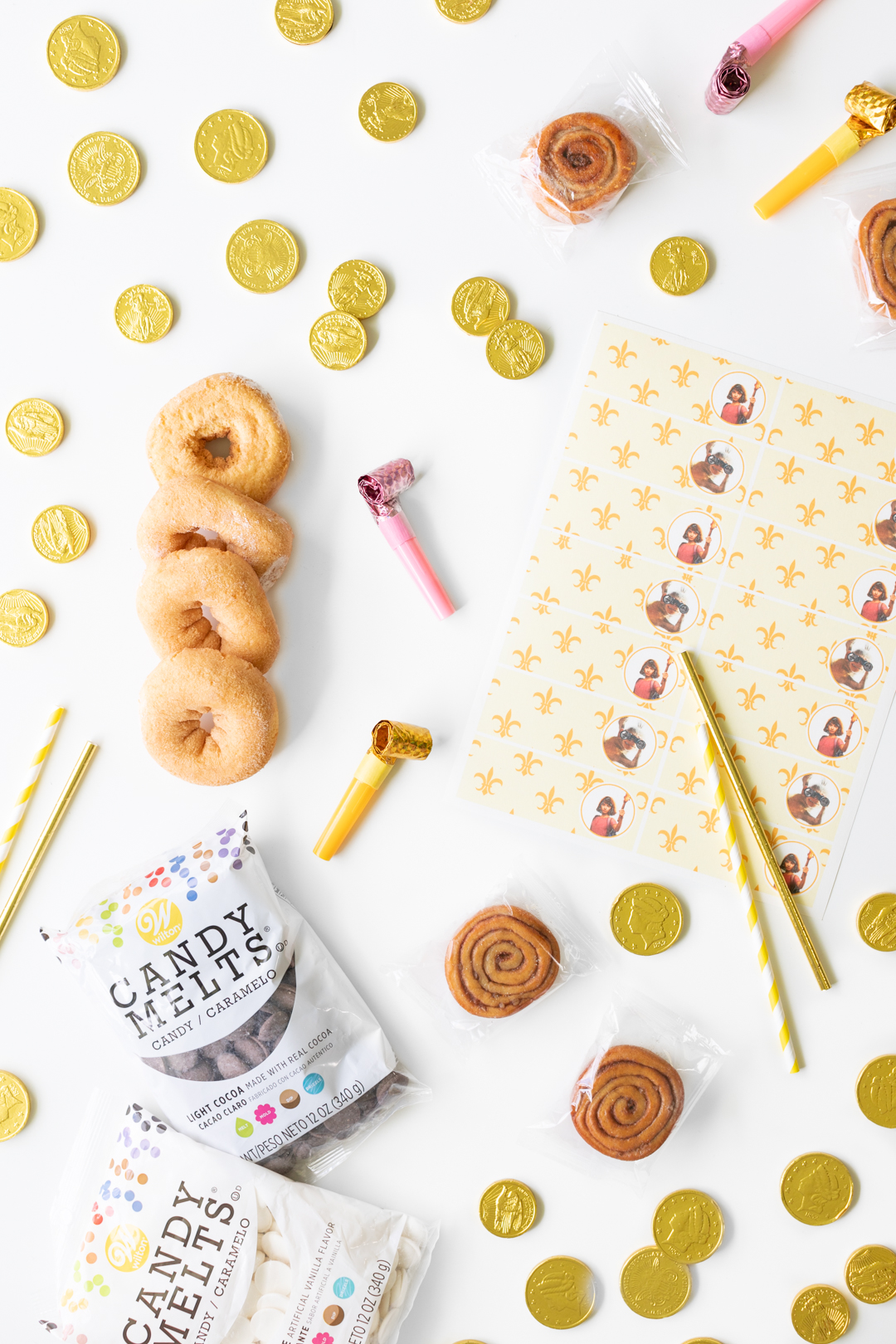 Here are more ideas to put together a simple celebrations that would even be perfect for a Dora the Explorer birthday party!

To make these cute movie inspired straws, save the file to your computer and then open the file to print it. Cut out each flag and fold them in half. Wrap each flag around a paper straw and use your choice of tape, glue dots or fast drying non-toxic glue to adhere them. 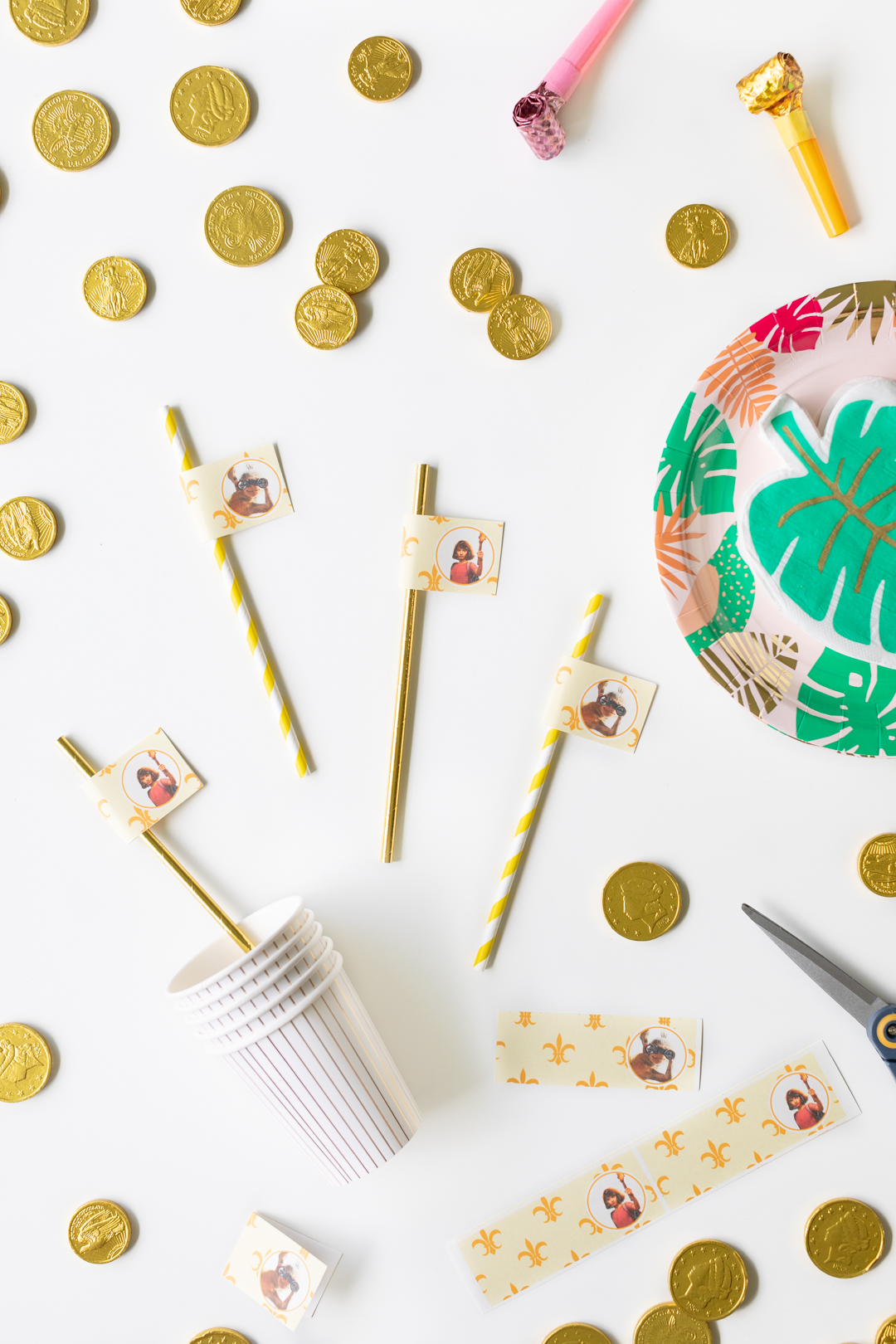 We all know and love Dora The Explorer Boots, the monkey! To celebrate this upcoming new live-action flick, it would be fun to create Boots inspired eats and treats! After brainstorming some of my favorite go-to ideas, I came up with these adorable monkey donuts. The best part is that they are so easy to make that anybody can do it both young and old. Have fun with it!

Here is what you need to make these yummy Boots inspired creations: 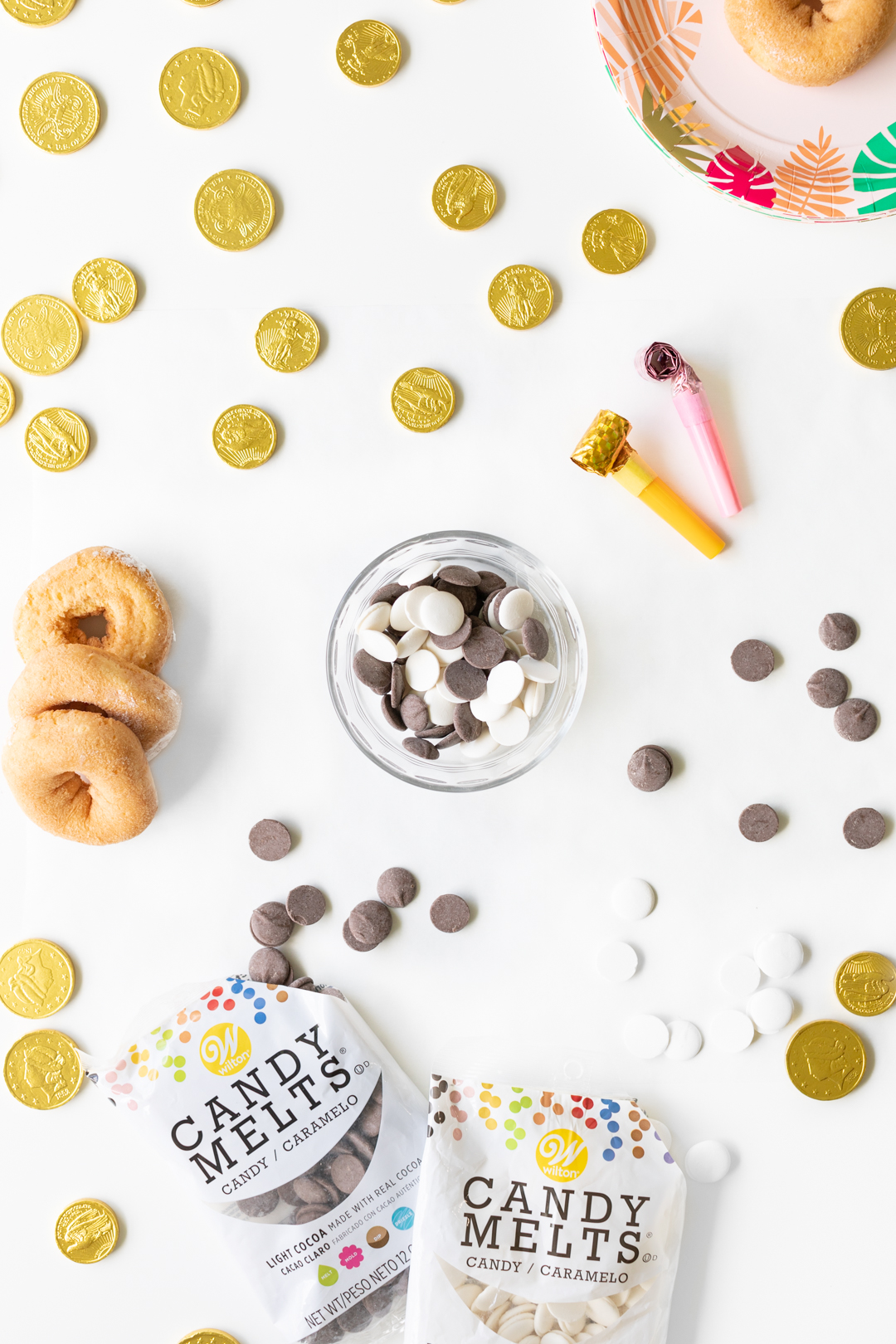 To start off, we are going to melt the Candy Melts using half Light Cocoa and half Bright White to make the perfect dusty color that looks like Boots. Once the mixture is melted, we’ll make cute little fur patches on a piece of parchment paper. Then, stick them in the freezer to cool. 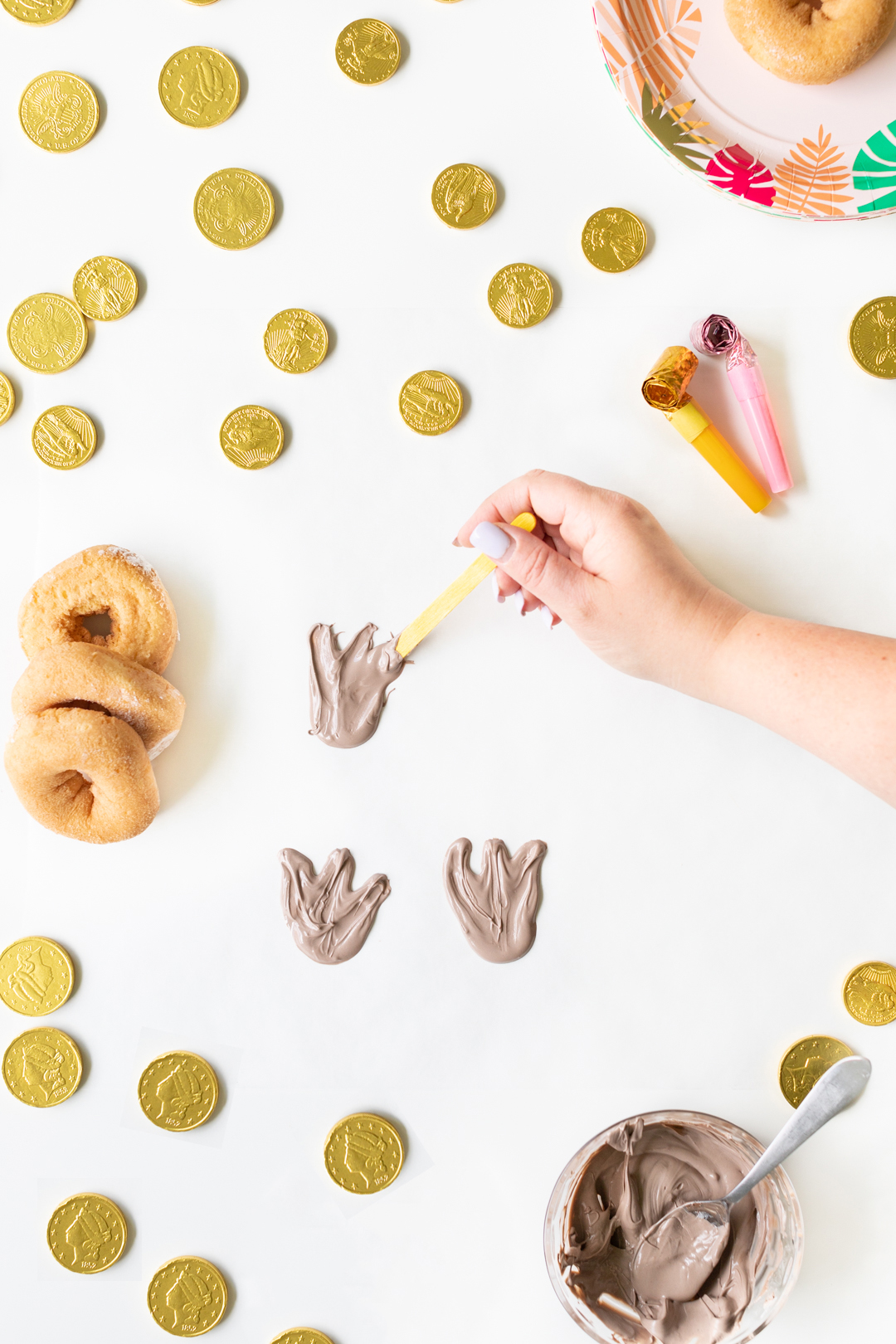 While they are cooling, use the extra melted mix and toothpicks to adhere the halved cinnamon pinwheels onto the plain donuts. 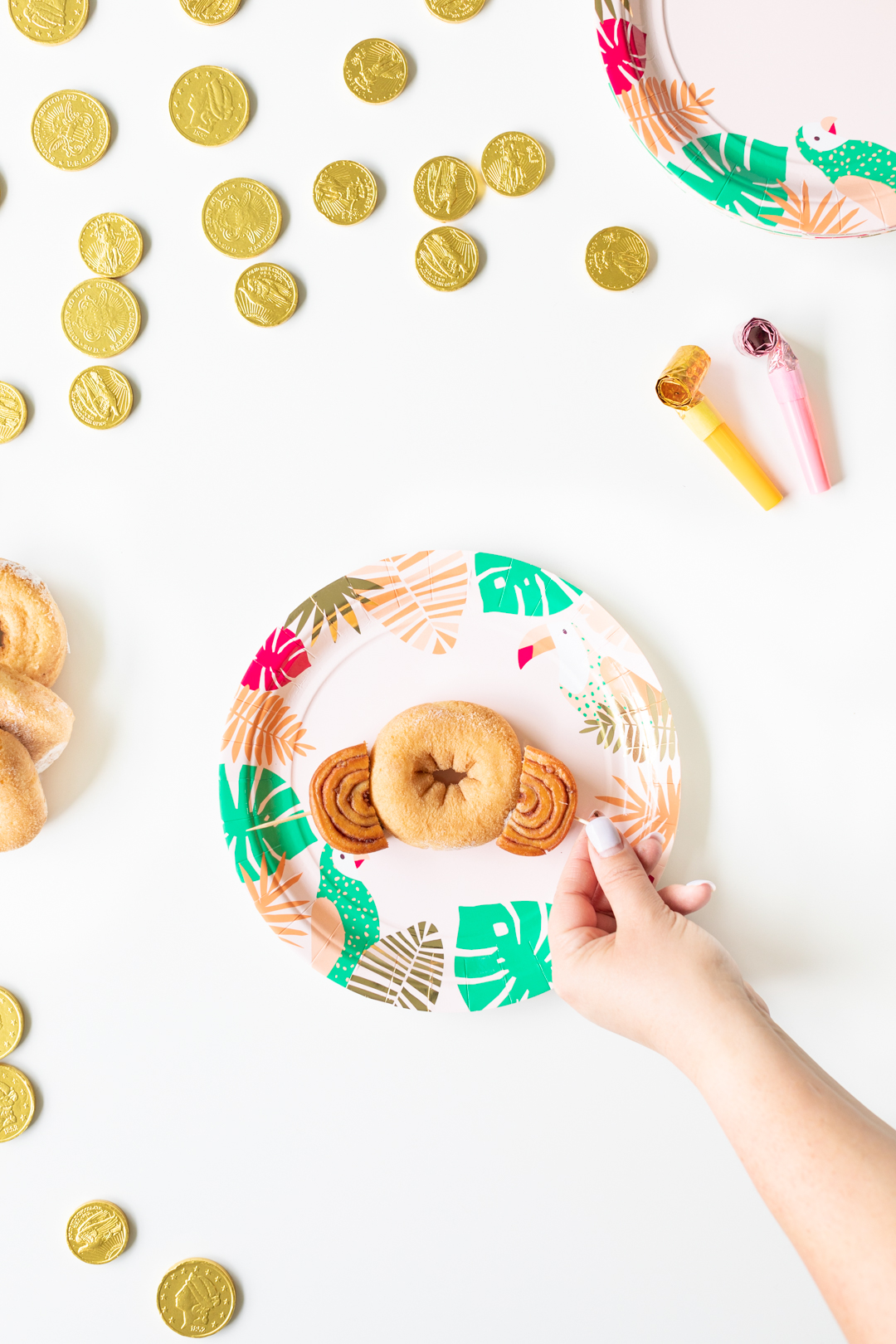 Then, adhere the fur patches to the bottom top of each donut.

Then take 1/5 of another plain donut and stick into the center of each donut. 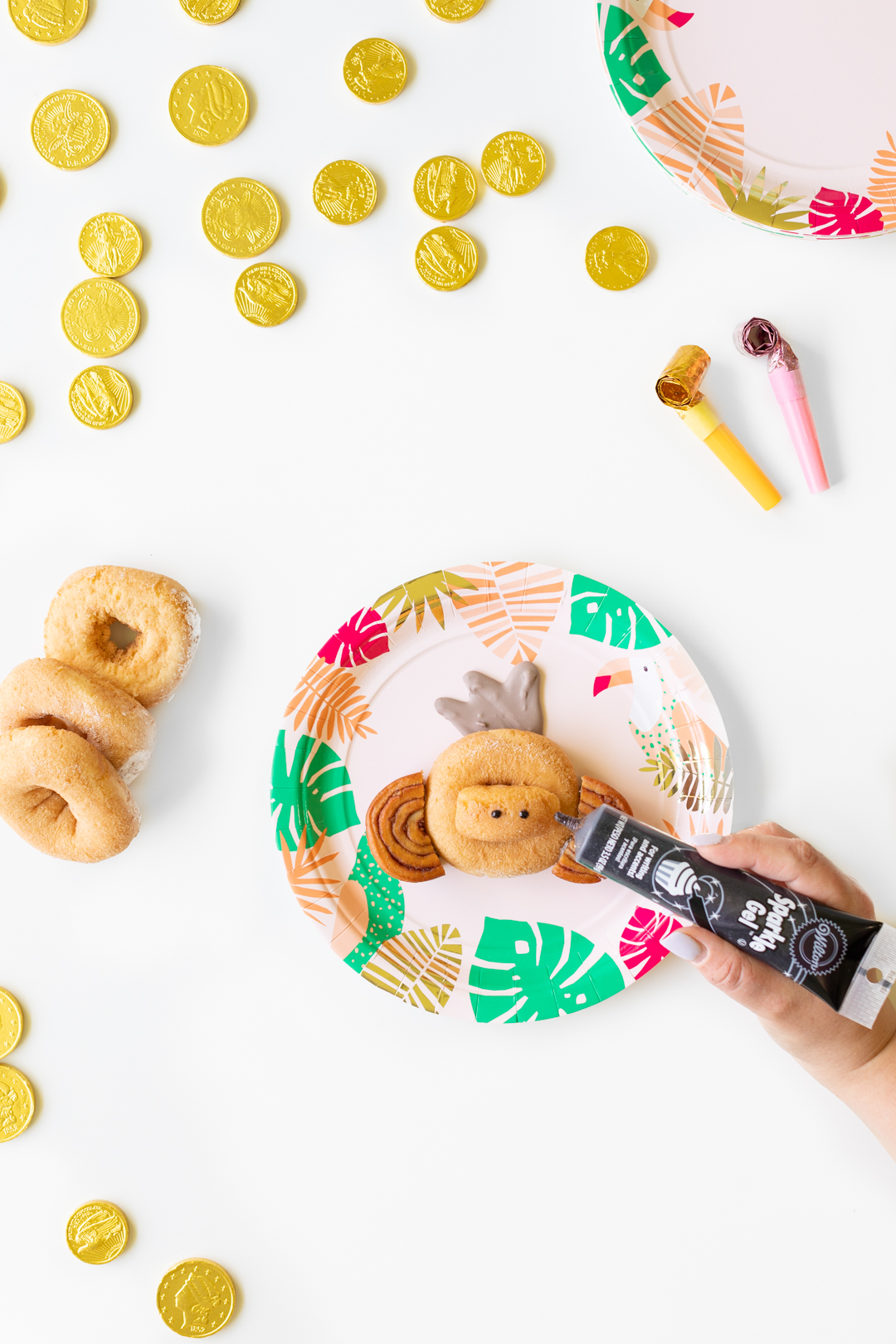 Using Sparkle Gel or Black Icing, make tiny little dots on top of that little donut piece we added to represent the nose. 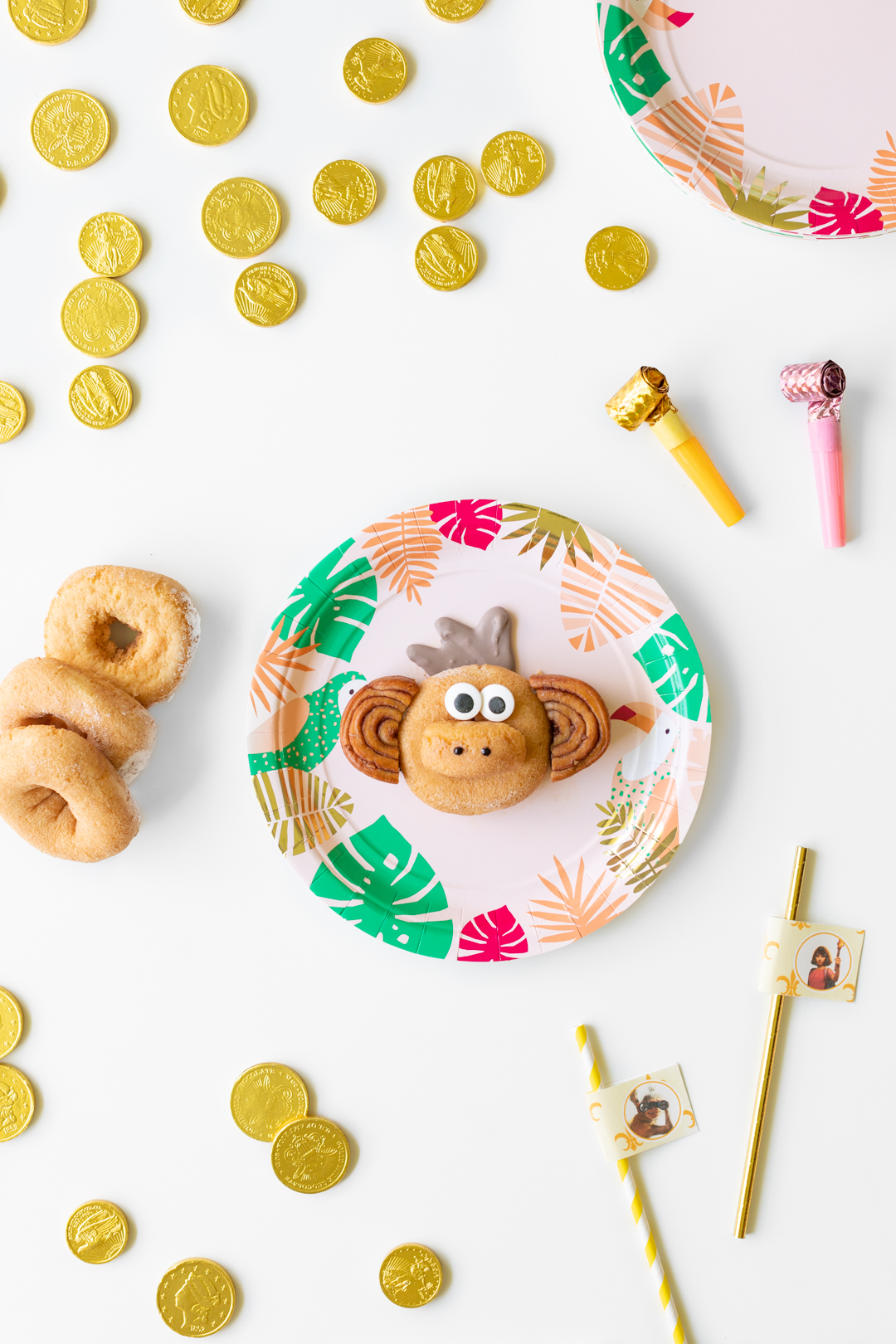 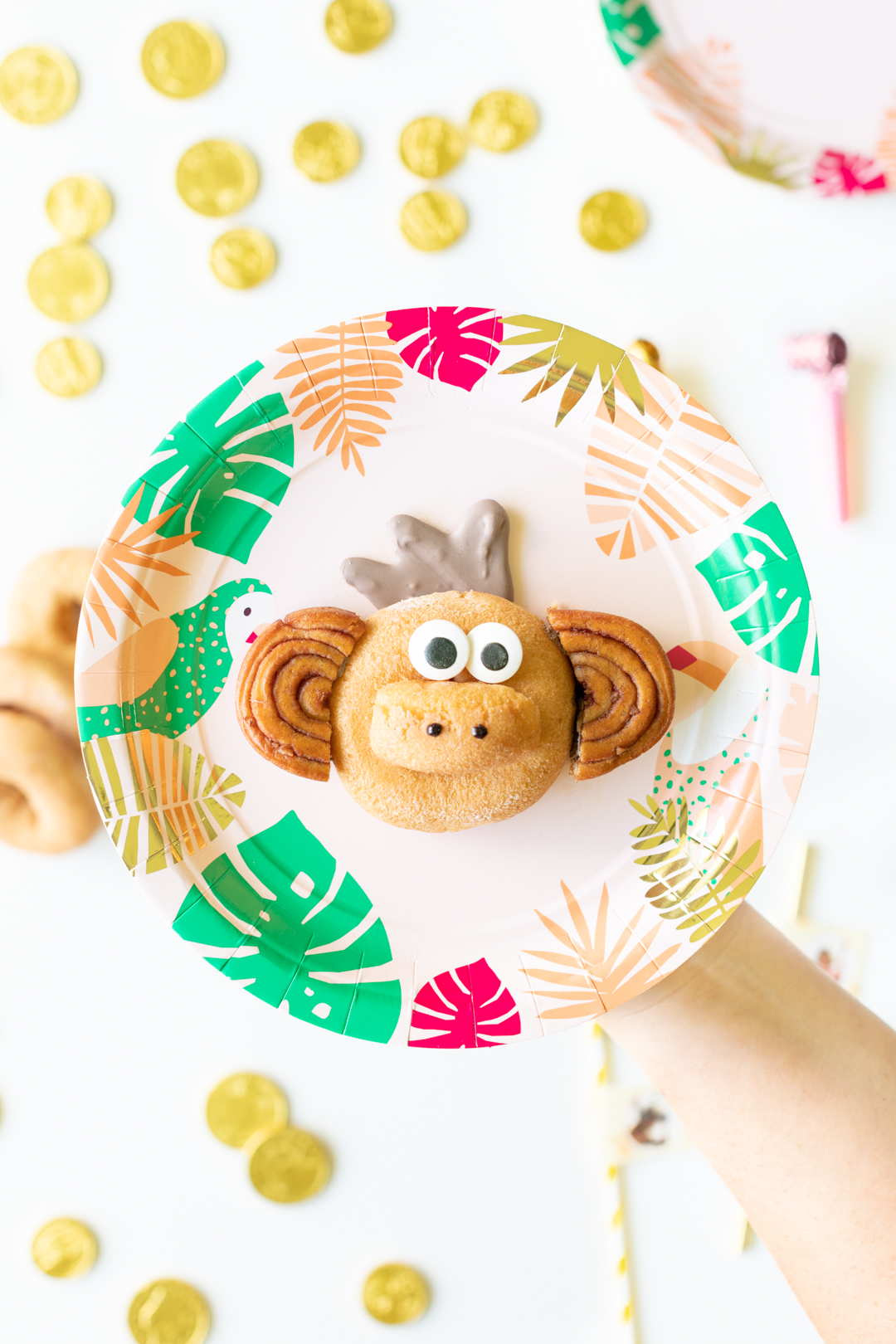 Voila! You have just made the cutest Boots inspired monkey donuts on the internet!

Start by cutting one donut into 4 equal pieces and set aside.

In a small bowl, add Candy Melts and melt in the microwave in small increments, mixing well in between until fully smooth and melted.

Using a popsicle stick or small spoon, create "fur patch" shapes with the melted mixture on top of parchment paper.

Put fur patches into the freezer to solidify. This will take a few minutes.

While they are cooling, use the extra melted mix and toothpicks to adhere the halved cinnamon pinwheels onto the plain donuts.

Adhere the fur patches to the bottom top of each donut using the melted Candy Melts.

Insert the 1/4 pieces of donut that you put aside in the center of each donut, using the melted Candy Melts.

Using Sparkle Gel or Black Icing, make tiny little dots on top of that little donut piece we added to represent the nose.

Add the candy eyes using the melted Candy Melts to keep them in place.

Once everything is set, you can remove the toothpicks from the ears and they should stay in place.

As an Amazon Associate and member of other affiliate programs, I earn from qualifying purchases.

Now all you need to do is make plans to see Dora And The Lost City of Gold in theaters with your family on August 9th! Get tickets here: https://tickets.dora.movie 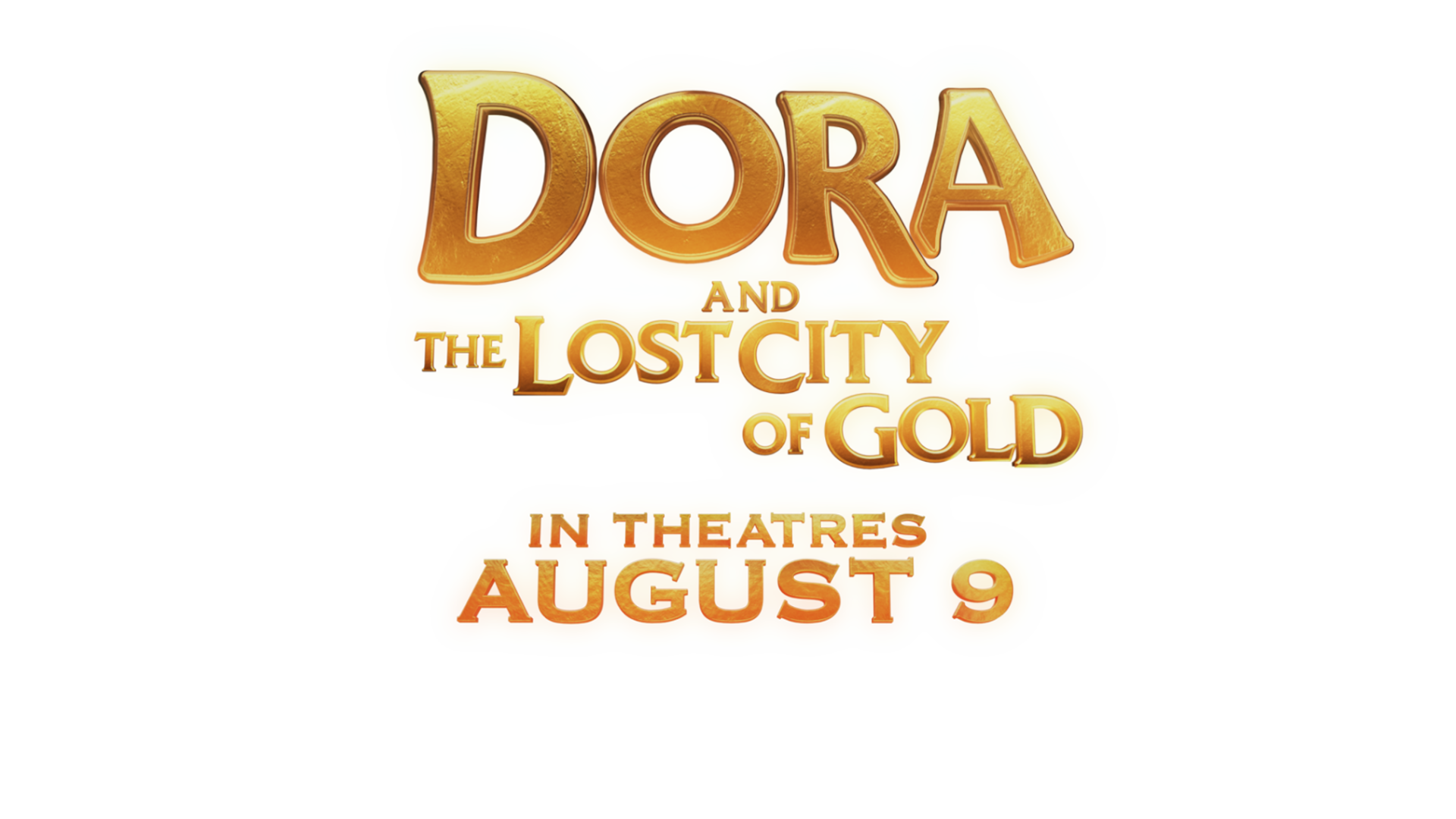 Who will you take to see this movie with?