Gobble, gobble. Generally we serve up turkey and ham for holiday meals, but chicken can be fancied up too!  I kept the ingredients down to only five to make this really simple. Plus cooking it in the slow cooker frees up your oven for all the other delicious sides you're planning. I'm just drooling at the thought! 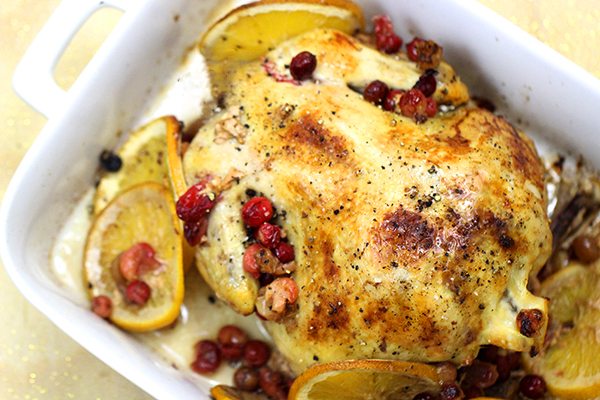 A couple of weeks ago, when I was lounging around and pinning recipes to my slow cooker recipe board, I stumbled on a really intriguing chicken recipe. It was "Chicken In Milk", the pinner proclaimed that it was quite possibly the best recipe of all time. How could I not try it?? I never really thought of using much milk in the slow cooker with meats, I thought maybe cooking it that long would make it funky. I'm glad I was wrong because this recipe turned out famously. 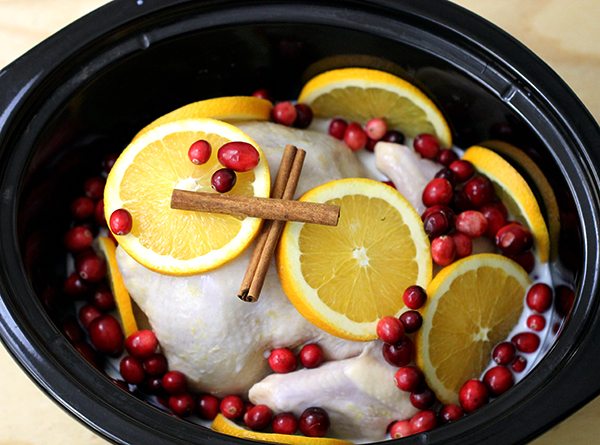 After digging in a little I found the original recipe using the milk with chicken from Jamie Oliver. That recipe calls for sage, lemon and garlic and other goodies in addition to the milk. The pin that I actually found first was based on Jamie's recipe, but made slow cooker friendly from Simple Bites called Christmas Chicken in Milk with Orange, Cinnamon & Savory. 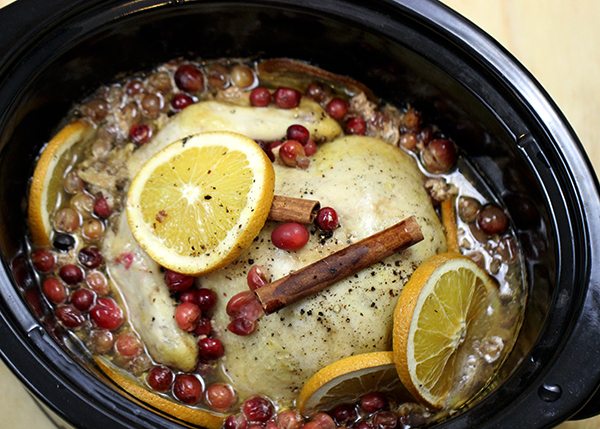 Just the idea of cinnamon and orange sounded brilliant. I could practically smell it through my computer screen. Well, since I had a gigantic bag of cranberries begging to be used, I had an idea!  The combo of oranges, cranberries and cinnamon just sounded really splendid for the holidays. The best part about the recipe I put together is the scent! Great way to make your house smell just like Christmas. 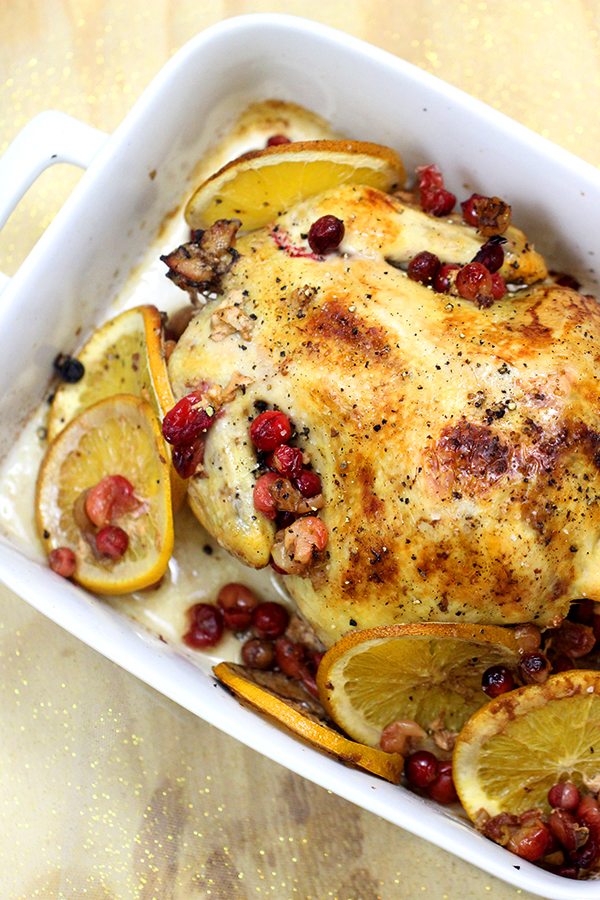 Before I jumped in head first, I wanted to look up other tips for cooking a whole roaster chicken in the slow cooker. I snagged some awesome tips from this post from The Little Kitchn. After reading, I decided to broil the chicken after it was done cooking, it was an excellent idea as it looks and tastes a whole lot better with a beautiful browned crisp to it. I would really recommend doing it although, it's really not mandatory since your chicken will technically be cooked once removed from your Crock Pot. But.. seriously, do it *wink*. I also used the idea of stuffing orange halves into the chicken for extra flavor, but mostly to keep a nice form.

I took all the best cooking ideas and minimized the ingredients to make it more simplified. Cuz, that's how I roll!

What are your holiday go-to recipes? Have you ever made chicken for a special holiday get-together?

This chicken must smell amazing when it is baking. Please bring it by Weekend Bites today... folks at the party will really love it.

Oh my! This looks incredible! Pinned and tweeted. We always love partying with you, I hope to see you Monday at 7 pm at our party. Happy Saturday! Lou Lou Girls

Courtney at A Life From Scratch

Always fun to learn a new way to use cranberries! Looks delish too. Thanks for sharing on the Project Parade link party :) I'd love it if you stopped by my blog sometime when you get a chance!

Never tried doing a whole chicken in the slow cooker. This looks amazing!! Found your recipe at the Two Cup Tuesday Link Party. I am one of the hostesses of Tickle My Tastebuds and would love you to stop by and link up this recipe if you have not yet already. Here is the link http://bit.ly/1vJVhoh Lori